I'm getting fat again. There's no way around it.

I can't wear any of my favorite skinny shirts like my Star Wars shirt or GiantBomb or Foo Fighters or Punisher. They all just highlights the gut.

This started when I moved to Madison for 2 months last year. I put on about 8 lbs there and it wasn't temporary bloated water weight. It was that permanent weight that you just know is different.

I've been trying to fight it. I got myself back down to almost normal weight for a brief period between August and October, but then stress and travel got to me.

I spent so much time socially catching up with family and friends that I was going out eating and drinking Thursday - Saturday pretty well through Thanksgiving.

Currently I'm about 12 lbs and several inches larger than I'd like to be. Last time I had to break this barrier, I broke my leg and didn't have an appetite thanks to the narcotics I was on.

I'm starting to get worried. I've been making short term goals that I've not been able to meet.

If I can just get through Thanksgiving, I can get back on a normal workout routine and eat better.

Then the holidays filled up every weekend.

OK, well, Thanksgiving really kicks off holiday season, so after New Years I can really hit it again, I have nothing planned in January.

Then I had to go to Dothan Alabama, where as far as I can tell, you just need a good fryer to open a restaurant there.

Then two trips to Madison, then to Columbia, then there's the Blues games I have tickets to, and the events we've had on the calendar.

I've done well this week and have eaten relatively well and have gotten a solid workout in every day.

I feel good right now, but I'm just looking at non-stop travel and am realizing I need to figure out a system.

I don't even know how I'm going to stay awake let alone eat well on these trips. I'll be running through a crowded airport trying to get to my connection while shoveling a pretzel in my mouth or grabbing Wendy's on the road because there is nothing else to eat.

And beyond that... how do you keep a workout schedule? Most these trips are going to require me to be with a client or friend the entire trip. I'm going to try to sneak away for at least a jog, but from what I've experienced so far with these sorts of trips, I'm going to maybe get one run in while wine-ing and dinning with clients.

I really don't know the answer to these questions. Eat better. Really make an effort to workout. If drinking is involved, stay away from beer.

We've even talked about looking at houses in Madison just as a way to potentially cut down on travel, but soon realized, I'd be traveling just as much, it'd just be coming back to St. Louis.

I gotta lose this gut. I cannot be a fat man again. I just felt so terrible all the time. I'm starting to feel that way now. Just constantly tired and apathetic to any events. I don't like it.
Posted by Djs9pd at 3:54 PM No comments:

Email ThisBlogThis!Share to TwitterShare to FacebookShare to Pinterest
Labels: Musings

Damn, I don't remember feeling this tired and jet-legged even when leaving Europe. I know I was, but that's sort of the thing about feeling exhausted. You have this feeling of wanting to give in, climb into bed, and just never leave again.

Been a few weeks since I've had a blog so I figured I'd give a run down.

This was the first festival in years that we would've seen any film they were showing.

Every year tends to have a trend, usually the hot topic from a year or two ago. So there was a large amount of films looking at the Black Lives Matter protests as well as the day in a police officers.

There were portraits of these "thugs" as so many people like to label them, spending time with their families, explaining to their small children why it's important that they stare down the guns of the National Guard night after night.

There was two years in the life of the LA Police Department where the officers were dealing with the worst humanity has to offer minute after minute and are expected to be perfect at all times.

I think my favorite line came from the Police Captain, "we as police officers rang up a huge bill in the past that we are still paying for. Every good thing we do pays a little off, but every bad thing we do adds years of debt."

We left the festival feeling politically re-charged, enough so to where I started a little mini-fight with a family member on Facebook.

We came home for a night, worked a ton, slept, packed our formal wear, then got in the car and drove up to Madison Wednesday the 8th for my company's holiday party.

I schmoozed hard, went out for drinks with my co-workers, and generally had a great time.

On Friday my department had an outing where we went to one of those Escape the Room scenarios. I choose the murder room where the story was we were knocked out while hiking and woke up in a warehouse with body parts everywhere. We had to get out before the murderer came back. 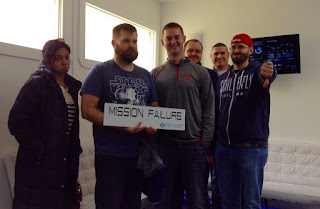 This required us to dig through garbage disposals, make human static electricity chains, and solve riddles. We failed as seen to the left.

That night was the holiday party at this huge concert hall.

The theme was medieval times. My CEO bought a suit of armor off Amazon, they hired sword fighters to break out into fights at random times, had jugglers, medieval themed games, and a medieval band.

Now this party had been talked about like a legend since I was hired. It's the night that the entire company goes bonkers nuts, drinks too much together, and stays out way too late. The company even pays for taxis home so that no one has to worry about it.

We had a blast. We got invited to the cool kids after party and partied some more. We got back to the hotel around 2 am, woke up at 8, got in the car and drove home where we directly went out for my brothers birthday, and then to a second birthday.

And then the moment we got home, Sal passed out on the couch.

She's feeling a little sick, I feel completely jet-legged. Really, just want to get through this week and get on a normal schedule again.
Posted by Djs9pd at 8:36 PM No comments: