I took off of work Friday because basically everything awesome was happening that day already. We decided to turn it into an impromptu birthday bash.

So Sal and I started the morning with a kickass, giant breakfast: bacon, eggs, hashbrowns, and toast. BAM! Breakfast in my stomach.

As soon as my belly was properly full, we headed out to see "The Dark Knight Rises."

My anger at having to pay $4 for no reason quickly melted away as I sat in the theater chair while an organist played the Adam West Batman theme.

The movie was awesome. Go see it. It's long, so make sure you go to a comfy theater. All I'm going to say is that its better than Batman Begins, not as good as The Dark Knight, tons of nods to the comics and previous movies.

So after the film was over, we drove back downtown near where the theater I thought I bought tickets for was, and went to the Schlafly tap room.

For the next four hours, we just hung out. I wanted to keep things informal, because I've found in recent years, when you try to plan things out, everything falls apart. People came and went, people bought me beers, we ate pretzels and beer cheese, and had a ton of laughs.

When I had a proper birthday buzz going, we walked down to Soldier's Memorial to see a free Offspring concert. They rocked the hell out. Played a nice set of old and new and sounded as solid as their albums. 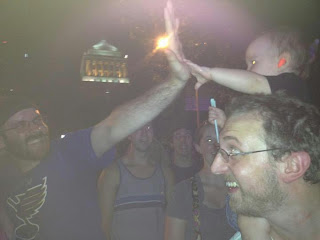 I was screaming every song at the top of my lungs and dancing around. Then I looked to the left and saw the most awesome toddler in the history of the world. Perched on his dad's shoulders and air drumming his heart out, we locked eyes, and both reached for the greatest high five at the same time. The moment was capture in the picture above and that more or less sums up the entire day.
Posted by Djs9pd at 8:35 AM No comments:

America loves our pharmaceuticals. Magic pills that instantly give us better living conditions, help us lose weight, perform sexually when we're past the age we probably should, and knock us out at night.

The thing I don't understand is literally thousands of years worth of humans were able to get by without a prescription to Prozac or Xanax or Viagra. Did they just deal with life? Were they too busy surviving to worry if they were going to be able to fall asleep at night?

Sure, there are American's that do benefit from Adderall, but for every one person that does truly need it, there are at least three college kids going to their doctor armed with the Wikipedia page of symptoms of ADD to get a prescription. I know this from the all night study sessions.

Go to a psychiatrist and spend a few sessions saying how anxious you are, and its not hard to find someone that will give you Xanax. You start feeling better, and the psychiatrist feels like they've made progress. Combine that with an anti-depressant and you should be the happiest person in the country. (A Harvard study shows a 400% increase in anti-depressant use between 1994 and 2008.)

Ambien is the one that baffles me the most. Sallie was prescribed some after her surgery and it was the first time I had heard of the drug. That makes sense, she was given  few weeks worth of pills because she was in pain from surgery. It helped her sleep.

However, I know many people that have a prescription only because they say they can't sleep. I'd never taken an Ambien and just sort of assumed it made you feel tired. Well, when I went in for surgery, I had 3 separate doctors say they really didn't like to prescribe Ambien. All of them said that the potential risk was incredibly high compared to the small benefit of an almost dreamless night of sleep. They told me I could lose hours of my life, not know if I'm asleep or awake, and generally get myself in trouble in this zombie state.

When 3 doctors are hesitant to prescribe a small dosage of the drug for a 215 lb male, there's probably enough reason to take a second look at the drug.

I guess I'm a little biased. I'm not one that goes to the doctor unless I really need to. I don't get sick. And I don't have crippling depression or anxiety. At the same time though, I see the pill abuse all around me. It's just a way to be bombed out of your mind in a socially acceptable way for a lot of people. It's only going to get worse, America is addicted to these pills, and as long as their prescription is refilled, they will continue to be a cash flow for these pharmaceutical companies.
Posted by Djs9pd at 10:16 AM No comments:

The Birthday Lists for Dan and featuring Sallie!

It's that time of year again, where I pretend that I'm not quickly approaching 30, and post another birthday list, hoping that you all will once again humor my childishness. This year, Sallie has asked me to go ahead and post her's on here too. So at the bottom, you'll find that girl's list.

So, we usually like fun things for our birthdays, but with the recent lack of cash flow, we are going to ask for a few practical gifts. 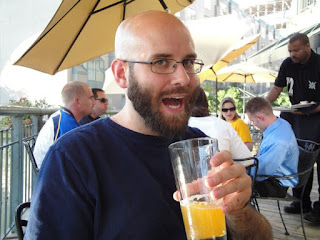 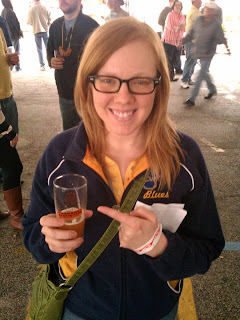 Gift Cards!!!!
The Rest of Everything