Separation of Tech and People

I love technology. I love the feeling of unboxing it. I love showing it off to people. I love that the entire internet is in my pocket.

I'm burned out on technology. I already feel my mind slipping. It allows me to be lazy. Instead of having to memorize stuff, I just pull out my phone. Instead of going outside, I turn on Netflix. Instead of staring at a record collection and really thinking about what I to listen to, I put Google music on random. I even allow sites to tell me what I will probably want to buy. I'm giving myself to Skynet willingly.

Sometimes you forget how much technology is ingrained in your life. I bet you don't notice how much you actually check your phone.

I see Sallie doing it at stop lights. Quickly taking a look at email, Facebook, and Twitter before the light turns green.

I notice it when my touchscreen feels hot to the touch and I realize that I've already checked all my social media sites recently.

I spend hours browsing my RSS feed and Reddit while sitting on the couch.

The focal point of most people's living rooms is the television. You have guests over and it's assumed that television will be on.

Sallie and I are going to try an experiment in the coming weeks. We're going to move the television up to where our office currently is. We're going to remove that portion from the focal point of our living area. It will be a place set up to visit, to read, to listen to records, to eat.

I'm going to see if removing that from this room always traveled, if any of my habits change.

In a few weeks, I also want to try just having the data on my phone turned off. I want to be cut off from everything except text messages and phone calls. I'm filled with anxiety just thinking about it, which is usually a sure sign that it's necessary.

It's just time to take a step back. It's all about restructuring life a little so that you have a chance to live it.
Posted by Djs9pd at 2:37 PM No comments:

Sallie, Matt, and I climbed in the car this weekend and went to Madison Wisconsin.

I think we all needed the break. I've not had more than one consecutive day off since early March, Sal's been working both her jobs, and Matt started a new job that often has him staying late and coming home to collapse. There was a sense of optimism on the car ride up. The complaints that pepper our lives were gone. This was an actual weekend away from it all.

The Hickle kids are cursed with this "Rip Van Winkle" syndrome. Instead of drinking a potion to sleep, they merely have to hear the hum of the car and they both are out. Their eyes were shut the moment we left Missouri.

I didn't really mind this time. I desperately needed some alone time to stare out the windshield, listen to podcasts, and just generally let my brain shutdown to emergency systems only.

We really didn't have an agenda for the weekend. There were a few breweries we wanted to hit in Madison, but we were all happy to just be away.

We woke up when we wanted. Did what we felt like each day. BBQ'd and played yard games. We did exactly what you think about when you see the coming of age stories that take place in the summer.

We went to several breweries: Capital, Great Dane, and Ale Asylum, but the one that stood out was New Glarus.

About 20 minutes south of Madison, through rolling farm hills, filled with cows, in a place where no GPS would work, stood this Disney-like-monument to Switzerland. The brewery had a huge beer garden, surrounded by a fake Swiss Town square on two sides, open to the fields on a third side, and peppered with fake ruins on the last. 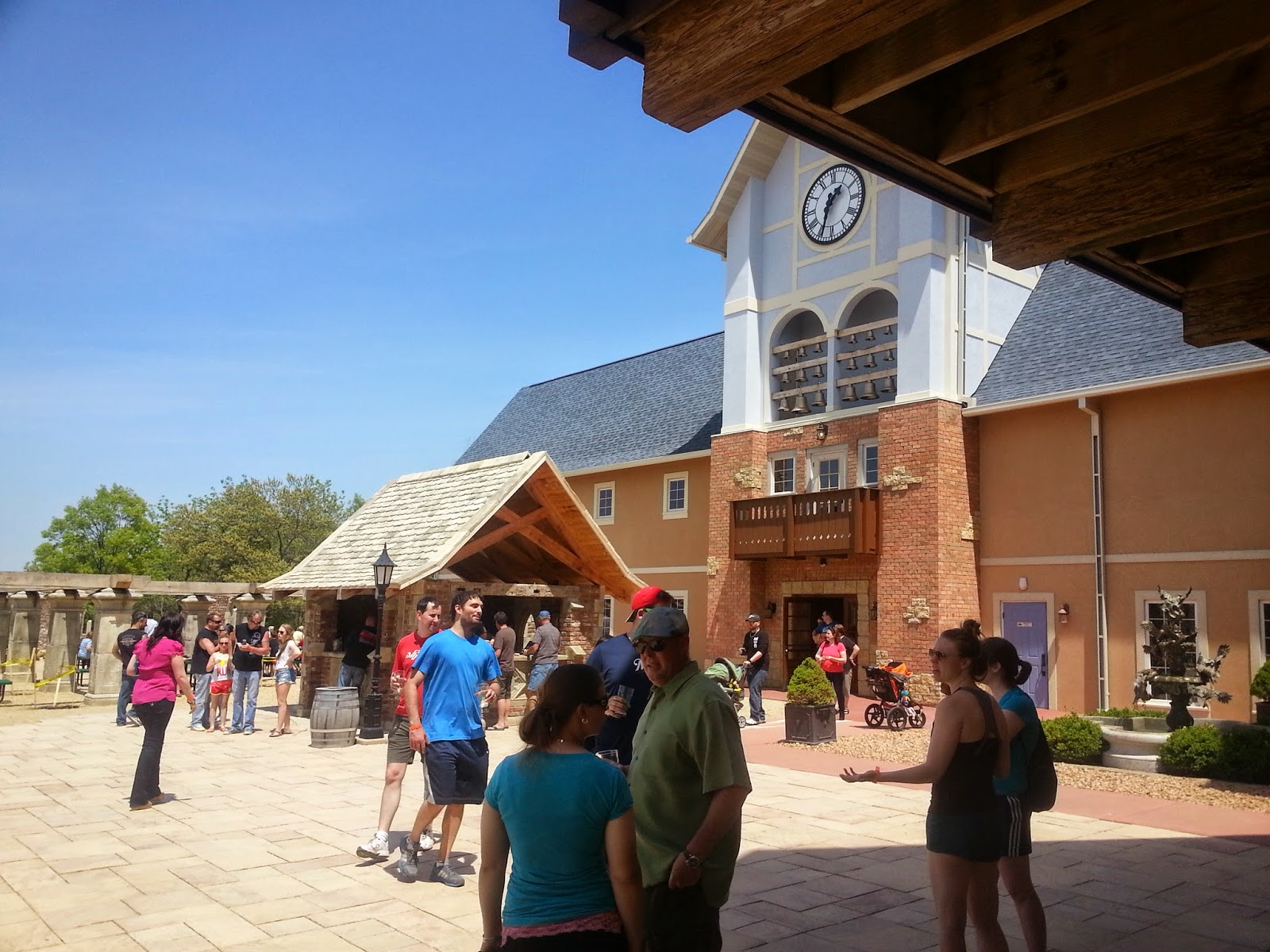 In it's weird psuedo-realism, I felt like a child experiencing an amusement park. Only at this one, children are given beers, and told to just hang out in the sun and enjoy. It was the most minimalist time I remember having in years. We had nowhere to be. Nothing to do. Only what we wanted.

The trip reset the grind. I've been working so much and so often that the creative part of my brain was shut off. Every morning, auto-pilot engaged, and I just worked until I met my OT hours. I'm going to continue working overtime while it's offered, but it's nice to have a reboot. Especially since I think OT is coming to an end.

The Happiness All Over My Desk

I'm staring at the puddle of my former cup of coffee. I had taken my first sip from it. That coffee is now all over my desk, computer, and lap. It was the last drop of coffee in the entire house.

It really felt like a blow. Like this little win, this little bit of happiness, was taken away from me.

Sal and I tend to get into funks. Usually these funks only last a day or two, but this year they seem to be hitting us more often and for longer.

For me, these funks are usually caused by an event. I've been dealing with a ton of stress at work, not getting a ton of sleep, and dealing with friends who don't deserve my attention. I do it with a smile. And then something dumb like an unexpected bill shows up and everything unravels.

Typically, I go through the Stages of Funk, which are similar to the stages of grief.


Usually, I can pull myself out of meltdown mode if I get some alone time during step 4. It's when people keep asking me what's wrong or what can I do that I'm thrown right back into step 2.

So how do you pull yourself out of a funk? How do you bring happiness back and learn to forget that dumb everyday stuff? How do you prevent the buildup of funk?

There was a Ted talk about trying to quantify what makes people happy. It came from one of the scientists that started Track Your Happiness. It's a site built to collect happiness data. You sign up, get a few text messages a day, answer a few questions about what you're doing right now and who you're with, and after 50 surveys, you get a report.

It's interesting where we are happy. The normal goals of money and popularity often make people more miserable. According to this study, autonomy, competence, relatedness, and self-esteem make us more happy.

My happiness report didn't blow me away. I found out that I'm most happy on Thursdays and Fridays, least happy on Monday. I'm most happy when I'm doing something I want to, but don't necessarily have to (autonomy). I'm happiest outside or at a brewery. And I'm happiest when conversing with exactly 2 people, followed closely by 1. Apparently, I don't like groups of more than 3.

But really what I learned from my happiness report is that the small things are really what makes me happy. A good cup of coffee, a nice craft beer, reading, or taking a walk. It's not things like winning awards or getting promotions.

So as I'm wiping up my little bit of happiness that was stuck under my monitor stand, I thought, "damn, how to I fill the void this cup of coffee has left."
Posted by Djs9pd at 10:33 AM No comments: