Went to the doc again today. He and the new guy were very happy with my progress. They did all sorts of bends and manipulations on my leg and gave the thumbs up.

I was given a different leg brace, one that mostly just keeps my knee protected. So now, I went from giant, bulky, nasty-brace, to new suave, space-age, knee brace.

I don't have to go back to the doctor until August 16th, which is one day before the year anniversary of this whole debacle.

I even got to see Dr. AwesomeBeard on the way out.

So great visit. (That is until I get what promises to be a several hundred dollar bill for this new knee brace)

And tonight, I drove for the first time since August. Sallie was beyond happy. She already has plans where I can drive her everywhere. I'm still not ready for the big time. Going to stick to back streets and short distances.

I've been out in public a little more lately, and since it's been unseasonably warm, sporting my leg brace in shorts for all to see, and I've realized how many people screw up their leg.

First, I notice people in the same brace as me. I can tell if they are new to it, if they've had it on for a few months. I can honestly say, I've never noticed anything with this brace before. And its not just a few, I run into someone every other week.

Second, people see this as an invitation to talk to me. I'm approached all the time with people regaling their tales of jacking their leg up.

Earlier this week, walking home from the post office, an old lady stopped me to tell me about her arthritis and how the doctor wants to replace her knee. She finished with, "You take care of yourself and are active your whole life and it doesn't mean anything." Sort of grim, but I've learned, always accept wisdom from your elders. Then she gave me a "God bless you" and off she went.

A few weeks ago, Sallie and I went for a walk, and this bad ass, tattooed latino approaches us. I'm thinking, "crap, I can't run if we're about to get attacked." He looks at my knee, (I think he spots my weakness) and is like, "Oh dog, what'd you do to your knee?" We have a little conversation and I find out he broke his ankle and was in a brace for 6 months. I tell him I've been in mine for almost 7, and he says, "Hey man, good luck with that. Hope you get better soon."

It's this weird club where me, an old lady, and a young biker looking guy all can share our tales of woe. Something most the population will never experience. A small battle, that although we weren't standing next to each other during, we understand the pain and the memories.

I don't know what's changed in me recently, but I've been going about problems in a much different way.

One of my big character faults is freaking out about an issue, specifically a financial one, before taking a step back and thinking about it.

I read an article yesterday (and of course I can't find it now) about how something like 40% of Americans are one financial trauma away from losing their "stability." Basically, people are so strapped for money right now that if someone's transmission in their car blew out today, they are in serious danger of losing their house.

That is sort of how my brain has always felt. I've been in a situation where I'm living paycheck to paycheck since I started working. Usually scrapping by so much, that when I do find myself with a little cash, I buy myself something, just to release some of the pressure. (That's not really the best way to save money, I know.) 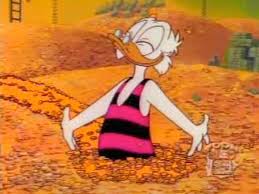 As long as nothing bad happens, I'm fine. I'm paying down debts and making progress. But then, say hypothetically, someone were to break their leg, require multiple surgeries, while being out of work for several weeks. I panic. I get really angry and frustrated because its out of my hands and all the progress I made is now gone.

It doesn't necessarily have to even be at that level. If I buy something on eBay for $30 and the seller disappears, I flip out. I'm not really sure why I am this way, but I've been trying not to freak out and it's been working.

For example, I sold a hardback book on eBay for $3. EBay only allows you to charge up to $4 for shipping on media. (Books, DVDs, games) To ship this book First Class (which is what my eBay profile says I'll ship it as) was going to cost $12.50. Even parcel post was going to be $8. So as you could see, I was in a pickle. I would either get negative feedback and possibly a suspension on eBay or I could lose money on the deal.

Usually I would panic and go ahead and send it, cursing myself on the way home. This time, I took the package back, and just emailed the guy and asked if I could ship it media mail. He didn't quite understand me at first and thought I was ripping him off, but after I explained what that meant, he was fine with me shipping it at a slower pace.

Second example was TurboTax. We did our taxes yesterday and since Sallie has an independent contracting job, TurboTax automatically signed us up for their "Home and Business" version which is $80. But since Sallie made so little at that job last year, we didn't actually have to claim anything.

So we went through and I wasn't paying attention (because I had been working on taxes for the past two hours) and confirmed the $80 cost and sent our return.

I realized that we didn't need that version and would've been able to just use the $40 version of TurboTax. I started looking around on the site and found that it said, "No refunds for the online version."

Again, normally I would be pissed, throw some things, yell at the cats, and just take the loss. I was feeling calm about the situation though, and spent 45 minutes in a chat with support and ended up getting money refunded.

So I guess moral of this story is when confronted with a problem, take a deep breath, and just ask for a solution. You might not always get one, and when you don't, you have my full permission to be angry, but when you do get one, you really feel like you won.
Posted by Djs9pd at 2:39 PM No comments: