Sal and I were planning on going to Montreal this year to meet up with some of her work friends, have her try out the French she's been learning, and take in a Blues game.

Unfortunately with all the house repairs we did, we had to change plans to a much cheaper destination, sunny wintery Detroit. (On further examination, this still wasn't actually cheap, so we'll be spending a lot of weekends in. You know, hindsight.)

We were met with the same, "Aren't you afraid of Detroit? Like, getting murdered or whatever? You know they have gun fights in the streets there in between Lions and Red Wings games" question from everyone. And the truth is, no. We weren't scared. 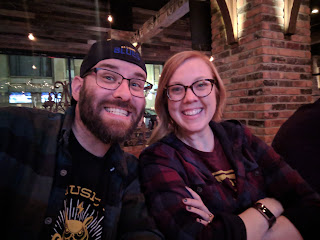 We arrived in Detroit via Indianapolis on Friday afternoon and immediately went to my favorite Founders. The place was packed (we didn't realize it had opened up a week earlier). Sal and I got a beer and sort of meandered until a nice older couple invited us to sit at their table. We made small talk with them, but nothing more.
breweries tap room,

Then we saw two guys sort of standing around and invited them to sit down. Sallie and I like chatting up locals and get recommendations. The internet's recommendations can only get you so far.

So we started asking these guys questions about their favorite bars, what they did, etc. One of them had worked as a carpenter for the Detroit Public Library for 22 years and is a union leader, the other guy is a plumber for the library and has only been there for a year.

We shared a couple drinks with them and just listened to how much Detroit had changed in 30 years. They ended up thanking us for giving Detroit a chance. The Union Leader had a meeting to get to, but the other wanted to show us his favorite bottle shop around the corner, so off we went where we chatted up the bartender, hung out with our new plumber friend, and they together gave us a good breakfast recommendation the next day.

After that, Sal and I ate at this fantastic place called the Rusted Crow. Great food, great drinks, surrounded be amazing parks that were all decked out in Christmas lights. 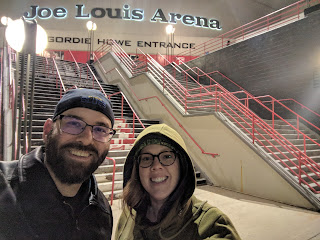 After our bellies were full, I had to do what I knew I had to do... I had to walk down to the old Joe Louis Arena where the Red Wings have played since 1979 up until last year. It's sort of a hockey temple along with the hall of fame and Madison Square Garden. It's due for demolition, so this was going to be my last chance. We brazed the heavy winds and snow.

We ended the night at a brewery called Batch Brewing just in time for last call.

We really got to see a beautiful city at night. Detroit's architecture hearkens to a time where they had more money than they knew what to do with. Gargoyles, towering building, marble, statues, just a gorgeous reminder that this once was an empire.

On Saturday, we woke up and ate breakfast at Hop Cat... and our same bartender from the night before was working here too. Little stalkerish on our part, but we were hungry and had no options, so it worked.

After brunch, we walked the mile down to Little Ceasar's arena in a beautiful light snowfall. 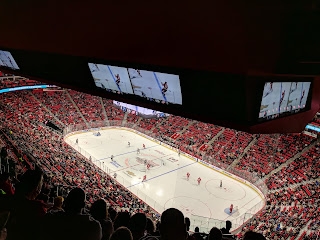 The building is beautiful. Natural light pours in from every outside wall. There are about a dozen legit restaurants and tap houses to choose from. The score board is almost as large as most other arenas.

The only issue is you climb an almost vertical staircase, to sit in the smallest seats I've ever sat in, and you don't even have a great view. They built some of the boxes to hang out about 30 or 40 rows out. Sure they put TVs on the back of the boxes for us in the nosebleeds, and sure you technically can see all of the ice, but it felt claustrophobic. Also, if a dude over 5'9" sits in front of you, you can't see the nearest corner of the ice.

Also, everyone was super interested in what the Little Ceasar's was like in the arena. Well, I'm sad to report, even $5 Hot and Ready's were hit with stadium pricing, and cost $13.

We left the arena to a sweet 6-1 Blues win and just sort of bar hopped back toward our apartment.

We went to some hip bar playing techno music that supposedly mad fancy cocktails but didn't even know what a sazerac was. We then found a hotel bar that was a little more divey. We chatted up the bartender who was a 30 year old artist that works two bartending jobs in the city. She gave us all the best local bars to go to and a shot called Detroit's Dirty River (I think it was called that, it was dark blue) for thanking us for coming to Detroit.

The next four hours are a blur of new sights, tastes, friends. We ate at a great place called Rock City Eatery, made friends with who we assumed was the owner of Motor City Brewing who gave us a beer on the house and one in a can to take home. Then the waiter at Motor City Brewing was also the same guy that was our waiter at Founders. He recognized us and sent us to a dive bar called Bronx Bar, and then we ended the night at Jolly Pumpkin Brewing.

This was on the b-tier list of places we wanted to go because they specialize in sour beers... and it's just not a good idea to drink a ton of sour beers on vacation... cause well... you're basically drinking bacteria that could do things to your stomach.

But, it being our last stop, we figured we were safe. And we again chatted some awesome guys up at the bar who were pilots for UPS, one of which was from St. Louis. We spent a solid 90 minutes hanging out with them until we went back to the air BND we were staying at. 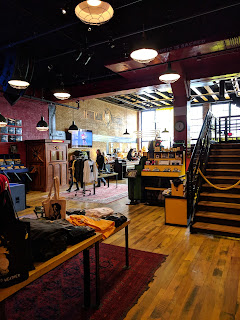 The next day, we woke up, had breakfast, and stopped by Third Man Records on the way out the door. This record store is owned by Jack White of the White Stripes fame. It's a record store for lovers of music. They actually press vinyl in house and release old blues albums from the 30s, allow independent artists to record cheap, and they have the only live to tap recording equipment in the country.

It's a really cool spot, had this yellow theme that really worked.

We grabbed a few live records from their store shows, a record cleaning kit, and a slip pad for our record player. And again... we chatted up the dude working there. He was so excited and happy that we specifically came to his store that he threw in a $60 pair of headphones for free.

All I can say is everything you've heard about Detroit is wrong. I've never felt more welcomed by such a diverse group of people that are so incredibly proud of their city. It felt like a community of people that I have been chasing since I was a child. This real feeling of neighborhood pride, people that go out together, and talk to each other.

As we got on US-24 south, we both started talking about our next trip to Detroit.
Posted by Djs9pd at 8:39 PM No comments: