I was burning some time at Target a few nights ago and was spending a ridiculous amount of time looking at LEGO Star Wars and Star Wars action figures.

Looking at the 6th set of characters released as action figures I figured it out. Star Wars told a great and concise story, but it also let my imagination fill in infinite amounts of gaps. Who was the space man in the cantina? Why did he require a pressurized suit and no one else did? I'd spend hours imagining his adventures and bringing them to life with my GI Joes. BTW: He was a pirate that needed a pressurized suit because he often disabled other ships including their oxygen supply and would raid it.

There were certain scenes where I would pause the grainy VHS and just scour. The scene where Vader hires the Bounty Hunters in Empire, the Cantina scene, and the Jedi council in Phantom Menace all were ripe for my adventures.

And that's how you end up down the path of buying everything you can.

My adventures made me want to seek out actual information about them. 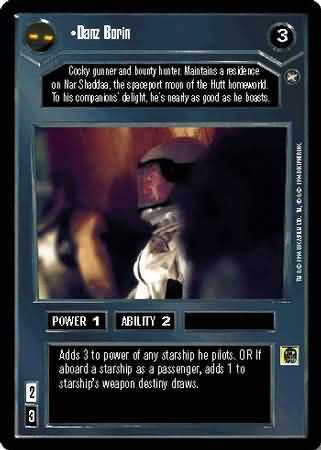 I started with the Decipher trading card game. Not only did I have a game, but I'd get little snippets that were considered canon about each of the characters. Turns out, that spaceman has a name, and it's Danz Borin.

So I started collecting these cards... and then nerdily writing the information down on note cards and filing them away in a small note card filing cabinet I had. I wanted to memorize everything there was to know about Star Wars.

Then the two lines about the characters on the cards didn't quench my thirst.

I next went to the Dark Horse comic books. Here I got stories from thousands of years before Luke Skywalker was born. I could see what sort of trouble Han Solo got into before he was hired to carry Luke and Obi Wan.

Then I went to the full novels where I got to read about Boba Fett crawling out of the Sarlaac pit.

Action figures, Taco Bell toys, posters, Micro Machines... I just consumed everything I could until I found myself a 32 year-old that has been carrying around two giant boxes filled with Stars Wars stuff.

Disney has done well with the Marvel universe, but there is a part of me that is worried about getting too much Star Wars. Rogue One told a story that I knew, a bunch of rebels get killed getting the Death Star plans, but that adventure was all in my mind and played out slightly differently every time I ran through it.

Now because of Rogue One, the mountain base I imagined being swarmed by Tie Fighters is now a tropical island with lumbering AT-ATs.

And Boba Fett became so much less cool when you realized he was nothing more than a clone and you had to hang out with his dad in Episode 2.

There is such a thing as too much Star Wars and I worry the Han Solo spinoff movie will be it. Why not stay away from the main characters and tell the stories of Admiral Ackbar or Greedo. Han is such a successful smuggler because my mind made up all of his and Chewbacca's adventures.
Posted by Djs9pd at 7:35 PM

Email ThisBlogThis!Share to TwitterShare to FacebookShare to Pinterest
Labels: Musings